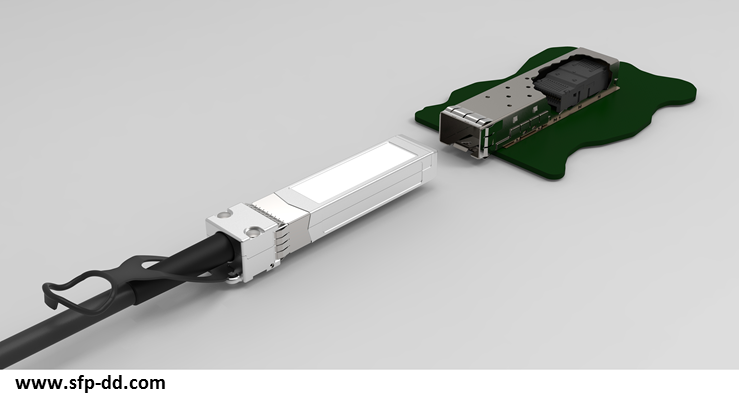 A new Generation of SFP supporting up to 100G: SFP-DD

The SFP-DD Multi Source Agreement aims to create a new form factor used as optical transceivers and for AOC and DAC cabling.

SFP-DD stands for Small Form Factor Pluggable Double Density. It will belong to the same family as the 400G QSFP-DD. The SFP-DD will follow the same principle as between the QSFP-DD and QSFP, but in this case doubling the density of the current SFP.

As mentioned in our previous article about the 400G optical transceivers, the QSDP-DD will support eight lanes instead of four lanes for the QSFP and QSFP28. Each of the eight lanes will operate a data rate up to 50Gbps providing a 400Gbps data speed thus increasing the capacity of the QSFP28 by four.

The next generation of SFP will support two lanes instead of one for the current SFP. Each lane will operate a data rate of 25 Gbps NRZ or 56 Gbps PAM4, giving a 50 Gbps or 112 Gbps PAM4 solution.

The MSA announced that the great advantage of their new transceiver is its backward compatibility with previous SFP. The SFP-DD ports will also support SFP. In addition, the it will be the smallest pluggable form factor to support 100G.

The main application of SFP-DD will be for the server-side interconnect. Naturally, the new interface will be use as DAC and AOC cables and as breakout cables with the 400G QSFP-DD. It will result in a new 400G QSFP-DD to Quad 100G SFP-DD direct attach cable and active optical cable.

According the MSA forecast, the first SFP-DD to come to the market will support up to 100G with two lanes of 50G PAM4. However the group plans to eventually reach 100G PAM4 by lane, providing a solution of 200G. As well, with the 200G SFP-DD opens the possibility to develop a 400G QSFP-DD to Dual 200G SFP-DD copper cable and optical cable.